Big Brother Naija “shine ya eye” housemate, Pere has got people talking after he gave fellow housemate, Maria a romantic peck from the blues. 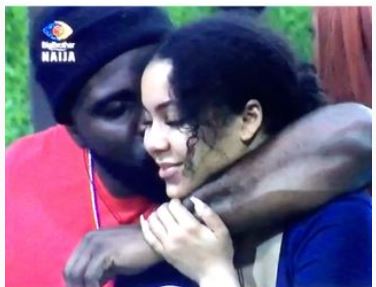 Maria was sharing a bit of her family story with other housemates when Pere who was initially backing her and didn’t seem like he was interested in the gist drew her closer, wrapped his arm around her neck and gave her a romantic peck on the cheek.

Maria who was surprised at his action said, “What’s that for, why did you do that… were you listening to my story”.

This however stirred reactions from fans who have started to assume that there might be a chemistry between the two. See some of the comments below,

Another Twitter user wrote, “The P in Pere stands for play boy”.

A Maria stan @eskisomma wrote, “Pere wants to use kiss and smile to lock her we say no. Maria is for everybody and nobody”.

“Fake it till you make it,” – Actress Ese Eriata advises Nigerians after her friend’s experience